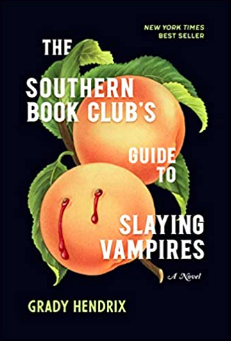 The Highlights: Whether you’re into Dracula or Gone with the Wind, this book has a little something for everyone.

Steel Magnolias meets every Anne Rice book ever written in this page-turner. Based on the title of this, I went into it thinking it would be chicklit with a dark sense of humor. Turns out, I was only right about the dark part (though there were a few humorous moments scattered here and there). This story of a group of Southern housewives in Charleston in the late 1980s had me hooked from page 1.

Patricia Campbell grew up, got married, and became a mother in a time when every girl is told the greatest achievement she can have in life is marrying a man and raising his babies. By those standards, she’s doing pretty well: married to a doctor with two kids and a dog in an affluent Charleston suburb. If you ignore the fact that her husband is a workaholic, her kids are turning into moody teenagers, and her mother-in-law’s dementia seems to get worse by the day, it really looks from the outside that Patricia is living her best life. But, really, the most exciting thing she has going at this point is her monthly book club meeting when she gets together with 4 girlfriends to discuss true crime books – just don’t tell the husbands – they think their wives are at Bible study. (And yes, to answer the question you weren’t going to ask, the toxic masculinity and extreme misogyny in this book is infuriating. I won’t even make excuses about the gender roles of the era and the cultural traits inherent in “Southern gentlemen”.)

Walking home from one such meeting on a warm summer night, Patricia is violently attacked by an elderly neighbor (and I won’t lie, it was more gruesome than I would have expected). In the aftermath, she meets James Harris, the nephew of the vicious neighbor. He’s polite, educated, handsome and new to town. Being a proper Southern woman, Patricia and her friends welcome him to the neighborhood and into their lives. Over time, though, she begins to become suspicious that something about him isn’t quite right. When children from the other side of town start dying, she feels certain that he’s behind it somehow, but trying to prove it results in her entire life drastically changing for the worse.

As Patricia struggles to regain control of her life, James becomes more influential within their tight-knit community, seemingly drawing everyone away her, including her children. Despite feeling like the world is against her, Patricia refuses to back down and puts her skills as a homemaker and impeccable hostess to use to bring down her neighbor once and for all.

I know on the surface it sounds cheesy, but I absolutely loved this one and can’t wait to dig into Hendrix’s other books. Whether you’re into Dracula or Gone with the Wind, this book has a little something for everyone.