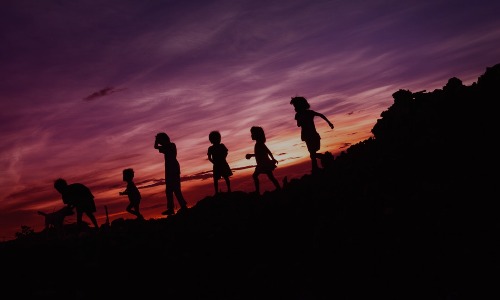 Summer means longer lazier days.  Arm yourself with these old school favorite games and let the kids play into the night.

Baby in the Air

This game is played with a large ball; each kid picks a number in the beginning of the game the oldest child takes the ball and throws it in the air crying “baby in the air number…” <whatever> then runs away. The child who’s # is called grabs the ball and yells freeze (he must have the ball to yell that}.Then the child with the ball take three step toward any other child and throws the ball at that child.  If he hits the kid the child gets a B, if he misses the thrower gets a B. When a child gets hit four times getting a letter each time baby he or she is out and so on till there is one child who is left.

Capture the flag is simple to set up, but incredibly fun and complex to actually play. If you have at least 8 people, a large piece of land to play on, and two flags, you’re already ready to go. The goal is to grab the enemy team’s hidden flag and bring it back to your side — but if you get tagged in enemy territory you’re off to jail. The first team to steal the other’s flag wins. For detailed instructions click here.

One person (or a team of people if the group is large) is designated It and an empty can is placed in the open playing field. With eyes closed, It counts to an agreed upon number, and the other players run and hide. It then tries to find and tag each of the players, always keeping a watchful eye on the can. Any player who is tagged is sent to the “jail,” usually in plain sight of the can. The rest of the free players attempt to kick the can before being tagged out. If they can kick the can without being caught, they set all the captured players free.

The rules of Manhunt are simple as it is basically hide and seek in reverse, a single person or a small group hides while everyone else seeks, or looks for them. The game goes on until all the hiders (fugitives) have been found and tagged by the seekers or the hunters. The last hider to be tagged gets to pick the hider(s) for the next round.